This video caught the attention of the FSRI YouTube division. This is exactly the right person who might benefit from a deeper knowledge of Faking Smart!

Sure, this fellow seems to have a good sense of what he's doing ...where he's going and how he want's to get there, but a few short courses from the FSIHL might sharpen his game.

KWA and the FSRI
Posted by Karl Wolfbrooks Ager at 12:37 AM 1 comment: 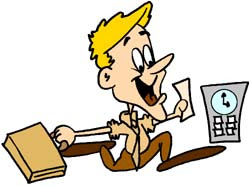 There's been a lot of talk about the FSRI "Five Second Rule." Here's a re-cap of our standard policy:
-The Five-Second Rule for decision making:

“Yes” or “no” questions are obviously the easiest for a Faking Smart! manager to accommodate. If an employee asks to have a day off next week to get married, say “no” without hesitation. If someone comes up and wonders if a fellow employee in the cubicle next to him should be allowed to drink beer during work, give a quick and unqualified “yes.” You’ve made the decision. Now, let it stand. It doesn’t matter what the consequences are, the fact that you’ve considered the problem and addressed it in a short order is all that counts.

Making split-decisions over open-ended questions, however, can be trickier fare. If, for example, an employee comes up to you and claims that a customer is concerned over appropriate federal compliance for licensing of a product, answer with an abrupt: “Tell him to bring up his concerns with our licensing department at extension blah, bla

h, blah.” Likewise, if an employee comes up to you in tears and says that he just learned that his family pet has died, answer curtly with this: “On behalf of myself and Incredidata (or whatever company you work for), we offer our condolences. Now get over it and show me some numbers.”

Remember, you have five seconds to come up with an answer to a problem or question. If the reply runs longer, don’t worry. That the decision was resolved in five seconds is the crucial part. Business moves at a fast pace. By allowing yourself only five seconds to answer questions you are giving yourself time to fit in many more questions during the day. Imagine taking an hour to answer one single question. At that rate you would only answer eight questions in the day! (Six, if you subtract for a two-hour lunch hour.) By following the five-second rule you can answer 12 questions in a minute, 720 questions in an hour or 4320 questions in a full, 24 hour day! No wonder split-second decision makers are the ones that make it to the top. With the five-second rule you also avoid the pitfall most managers find themselves in: overthinking the overthinkable. “Don’t overthink it,” reminds the FSRI. “Make it a split-decision and git’r done!”

Good luck!
KWA
Posted by Karl Wolfbrooks Ager at 2:43 AM No comments: