All FSRI offices will be closed for the holiday weekend.  Offices will reopen on Tuesday 31 May at 8:00 a.m.

If you are participating in our Six-Week Program and have an emergency to report, please visit the FSRI hotline at www.fakingsmart.com/emergencystuff and click to speak with one of our thousands of our stand-by computer workers.  If you feel that you need to speak to an actual living consumer-relations agent, please try this number: 889-343-1492-5483-232-1


Have a great weekend!

(All employees will be require to work overtime next week to account for Monday's recess...)

Posted by Karl Wolfbrooks Ager at 12:45 PM No comments:

Yes, it's true... we're giving away five copies of Faking Smart! on Goodreads.


Posted by Karl Wolfbrooks Ager at 1:39 AM No comments:

With Spinoza's departure there was an uncomfortable feeling of quietude in the halls of the FSRI.  No longer was there the scratching at the door when Spinoza needed to be let out.  No longer was there the affectionate snoring in front of the fireplace while I burned the midnight oil trying to put the finishing touches on some groundbreaking article for an FSRI publication.  No longer were there the comforting growls and calls for help when Spinoza latched himself onto Decateur's leg during one of Decateur's rare visits to our headquarters.

Grief seems to be the only description for the emotions I have been experiencing these last days since Spinoza's passing.  But just as I was ready to accept the fact that, from now on, my life would be devoid of love...  enter Bertrand. 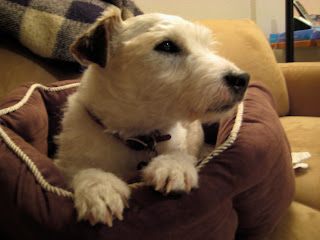 Yesterday, after a board meeting of our executive staff, I retired to my office to catch a few winks before proceeding with my quotidian duties.  Just as my eyelids grew heavy I heard a scream for help emanating from the hallway and I was jolted back to consciousness.  When I opened the door to the hall, I discovered Decateur in a violent and losing battle with a small, frenzied Jack Russell terrier.  After prying the tiny jaws loose from Decateur's immobilized leg, Decateur fled and I was left alone in a staring match with this unknowable and wild beast.  My instincts told me to retreat... and as I did, the terrier took it upon himself to follow me.  He came right into my office and sat down at the hearth of my glowing fireplace, right in Spinoza's old spot.

With mouth agape, I could only feel surprise at my situation.  "How peculiar," I said to myself as I lit my pipe and set to pondering.  "I could be wrong, but I think this pup has just found himself a new home?"  With that the terrier dropped to repose and let out a self-satisfied yawn.  It was then that I began the long work of ascertaining his name (for, indeed, he was male...).

I began where I should begin... at the beginning.  "Abercrombie?" I called.  The terrier took no notice.  "Adonis?"  Again, he paid me no heed... and on I went through every name recorded in Western scholarship until, later that night, I struck upon the name of Bertrand, the revered philosopher and intellectual of the 19th and 20th centuries.  When I uttered this venerable monicker the pup leaped to life and approached me, tail awag, in a gesture of friendship and loyalty.  I tossed him a section of a hotdog that I'd been snacking on and he gobbled it up with eagerness and joy.  His belly now slightly less than completely empty, he returned to his corner of hearth where he lowered himself and immediately fell into a comfortable doze.  Alas!, I congratulated myself.  Bertrand it is!

So be it...  when one part of your life closes, another always seems to open.  I had my VP of Domesticated Pets call our local humane society, and it was learned that our new friend Bertrand had been missing from the society for nearly a day, having escaped his cage where his previous owner was forced to leave him due to economic circumstances.  A few pieces of paperwork and all was settled.  Bertrand was a new member of the FSRI family.


Posted by Karl Wolfbrooks Ager at 3:45 PM No comments:

I regret to announce that my faithful servant and intrepid companion, Spinoza, has made his transition today.  No longer will his churlish bark echo through the halls of the FSRI.  No longer will his menacing incisors puncture the soft ankle skin of Betty, the administrative assistant in our Wichita offices.


It's not often that one finds a true and trusting comrade during our short but tumultuous sprint through this plane of existence.  Spinoza was just that.  Since the day I found him weakened and abandoned and curled up in a shoe box that was set adrift down the river Nile near our Cairo office in Egypt, I knew he was something special.  From that moment on he accompanied me in many of my most ambitious expeditions.  Spinoza has, among other things, mounted Kilimanjaro, windsurfed across the Atlantic, motorcycled over the Great Namib and even entered orbit (albeit briefly) during an air force testing mission.  He will be missed.


But on must we go...  We must raise a glass to memory, and drink to future compatriots.

Posted by Karl Wolfbrooks Ager at 4:12 PM No comments:

THE FSRI WISHES TO THANK ITS READERS

At about this time every year, the FSRI likes to sit back and take a break from its hectic blogging schedule and take a moment to thank each and every one of our faithful blog followers.  Sure, you could be checking up on other blogs, or checking your Facebook and Twitter accounts for more timely updates on more relevant news.  But for some reason you keep coming back, year after year, for something you don't quite get from those other social mediums. 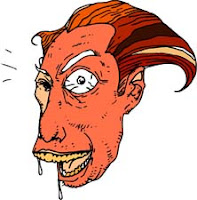 But we know why you keep coming back to visit.  We know why you return, because we get in the minds of our readers and produce exactly what they need (not necessarily what they want), and that is a feeling of familiarity and comfort.  At Faking Smart! you get just that...  A feeling that you find nowhere else.

When you visit this blog, it's almost like gliding into a reading parlor on a pair of rollerblades.  The next thing you know you're sitting in an enormous chair (a chair about 56 feet tall) and all you can do is relax and close your eyes.  The you start to drift... drift... drift into that expanse we like to call infinity, until every last one of your muscles is loose and all your thoughts are far, far away on a distant planet... 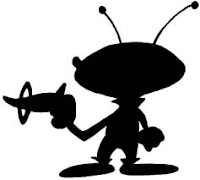 Where a futuristic galactic race is shooting plasma rays at your escaping planetary exploration team!  You round the corner and see your ship.  But when you turn back to rally your comrades, a plasma ray cuts through your sex partner's right clavicle.  And she drops.

In a scream of vengeful madness you turn back and rush the advancing aliens, past your team and right into the heart of the hoard.  You raise your woefully primitive projectile weapon and say these words: "I might have been a furniture maker if it wasn't for my father!" and then you fire indiscriminately into the flesh of the fiendish attackers.  One desperate look gains you a meeting with your lover's sorrowful yet glimmering eyes.  Her lips part to form a word.  It's  "I..."  or something like that.  "I... lll..." she stammers, blood oozing from her wound.  "I llllllloooov...."

But a directed plasma ray strikes you in the side of the head and a brilliant flash overcomes you.

Posted by Karl Wolfbrooks Ager at 10:46 PM No comments: